The story of the ‘Domus Dei’ of Portsmouth: commonly called the Royal Garrison Church by Henry Press Wright

As someone interested in local history I was aghast when I discovered we only had one ancient pamphlet on this subject in the library.  There were a number of architecture  students who had placed reservations on it.  It was duly changed to Reference only. But we needed more written resources.  Now out of print there was only one thing to do so I hunted round for another similar publication and this is what I found.  A reprint originally written in 1873 by Henry P. Wright, who was chaplain to the forces, and wrote it to raise funds for a restoration project begun in 1865. I subsequently discovered that part of this publication (with some of the plans and illustrations) is also on Google Books.

The original House of God or Domus Dei was founded  by Peter des Roches, Bishop of Winchester, circa 1212 as a hospital for the sick and a hostel for travellers, especially pilgrims- arriving at the port. It had a regular staff of 13 consisting of a Master who held overall responsibility for 6 nuns and 6 monks. However, its life as a place of sanctity was interrupted in 1450 when an unpopular advisor to the king, Bishop Adam Moleyns of Chichester  was murdered by some naval seaman (resentful of only being partially paid) when conducting a service.  As a result of this the entire town of Portsmouth was placed under the Greater Excommunication (see here also) an interdict which lasted until 1508 when it was removed at the request of Bishop Fox of Winchester. One of the conditions for the removal of the interdict included the building of a chantry chapel next to the hospital. This is the building we know today as the Royal Garrison Church. Of course there were also turbulent times under Henry VIII and dissolution saw the end of the Domus Dei. It surrendered its property and goods to the King, much of it ending up in the hands of the Powerscourt family of Ireland and the building fell into disrepair.

The medieval part of the Domus Dei is the second oldest building in Portsmouth, the oldest building in Portsmouth is Wymering Manor.  I trawled the internet and found an abundance of information about the  Royal garrison church (or the Domus Dei – the names seem interchangeable) before part of it was severely damaged by bombing in 1941.  See the bomb damage in a photograph in Art and Architecture Archive here. However the chancel remained intact and the building is now run by English Heritage. 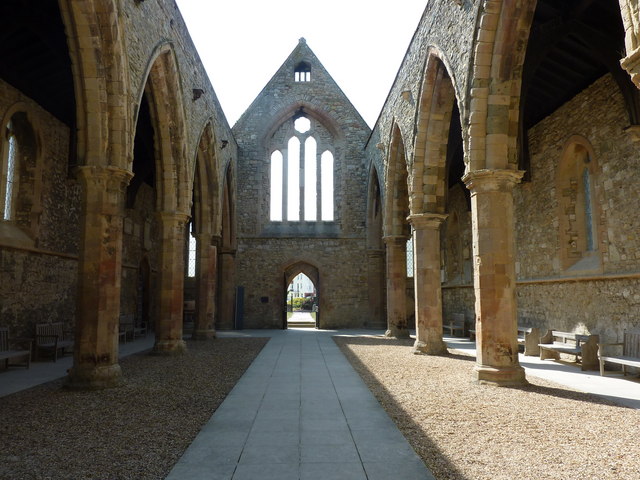 Perhaps you can remember when Time Team did some excavations on the original hospital site at the side of the church.  You can see the film in Box of Broadcasts (BoB) and you can also read an article here about historical Portsmouth written by Mick Aston.

There seems to be very little academic study about the Domus Dei so if there are any of our students out there who are studying architecture or history and need a subject for their research paper, this may be the one!

See also Dr Dominic Fontana’s page (Department of Geography) on Old Portsmouth which includes many drawings and plans of the area. Google Maps also has an interesting take on historical places in England.  The Domus Dei is number 4 in this YouTube film.

For those of you based in Gosport you don’t need to miss out, there is another Time Team excavation on BoB filmed in the cemetery of Haslar Hospital – also known as Nelson’s Hospital.

See more here about the latest archaeological discovery in Hampshire.