Tricorn – love it or hate it? 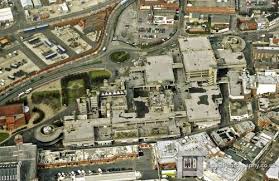 It is ten years since the death of the Tricorn and to celebrate or commiserate (the choice is yours) there is a fascinating exhibition at the Portsmouth City Museum until 29th June. Don’t miss it!

The Brutalist style  Tricorn Centre opened in 1966 and took its name from the aerial view of the site which resembled a three-cornered hat. Costing two million pounds to construct Portsmouth Council hoped it would revitalise a run-down part of the town. The exhibition is packed full of exhibits, with both galleries split into different subject areas, and running in chronological order from construction to demolition.

Although ugly and imposing from the outside the Tricorn was surprisingly cultural on the inside. As well as retail, the centre housed sculptor’s workshops, art events, a nightclub and two pubs- The Casbah and The Bell. However pub signs were refused; it was felt that they would be ‘detrimental’ to the look of the centre. The Tricorn Club was a platform for aspiring musicians including Slade and Roxy Music and as Granny’s it showcased groups such as Rod Argent and the Zombies, the Sensational Alex Harvey Band and Focus. The main shopping areas had a mixed response. The open market in Charlotte Street was full of local traders who sold fruit and vegetables and seems to have been a lively place. There was also a covered area known as The Village which in later years was full of trendy boutiques, record shops and the waft of joss sticks. However some people found the covered area too dark, ugly and uninviting. A library source tells me that “it never really took off and was a disaster from day one!” However it was clearly popular in some quarters. In an interview with Portsmouth News, John Stedman, the curator of the exhibition said “Skateboarders, artists, photographers all loved it. There are a lot of works of art inspired by the Tricorn from jewellery through to films.”

But with no flagship store in place, local shoppers lost interest and the Tricorn became neglected. It was synonymous with anti-social behaviour, stray dogs and graffiti. The eight flats that had been built were damp and cold from the start and had been vacated by the end of the 70s. In 1975 the Council planned to give it a facelift by proposing to disguise it as a jungle. A concrete jungle perhaps…? There are several memos in the exhibition about trying to improve the Tricorn’s appearance.

In 2001 the Tricorn was voted the most hated building in the UK by Radio 4 listeners. A year later the centre became officially derelict.http://www.derelictplaces.co.uk/main/showthread.php?

It was a controversial decision and there was a campaign to save it led by, amongst others, Celia Clark who provided many of the artefacts and texts for the exhibition.

We have her book in the library: The Tricorn: the life and death of a sixties icon http://capitadiscovery.co.uk/port/items/938550? See her other projects around Portsmouth: http://www.celiaclark.co.uk/

There is also an interesting book on the social history of post-war buildings in Britain. Good for architecture students and social historians. http://capitadiscovery.co.uk/port/items/1067331?

So, for those of you who remember it, did you love it or hate it? Did you have fond memories or did you avoid it at all costs?

I voted with my red plastic coin at the end of the exhibition. The ‘hate’ box was only marginally fuller than the ‘love’ box.

See the Guardian’s opinion on the legacy of Brutalist architecture : http://www.theguardian.com/artanddesign/2004/mar/15/architecture.regeneration

And finally, after the demolition auction…